Real graphics card competition on the Mac is not something that Apple users are accustomed to hearing about, but with the Radeon 4870 and now the NVIDIA GTX 285 available for the Mac Pro, it looks like we've got just that. While Mac gaming may not be any more viable than it was a few years ago, the ability to dual-boot Windows has been a huge win for those wanting high-end PC gaming without having to put another box next to their work Mac. With Core Image, CUDA, Snow Leopard and OpenCL just around the corner, a good GPU is becoming more and more of a mainstream need, and the Geforce GTX 285 looks like it has power to spare. 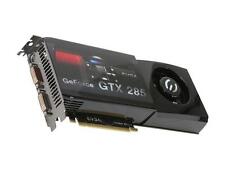 In this short review, we take a look at what the Geforce GTX 285 can do under both Windows and OS X. We even include some Windows gaming benchmarks, though our main focus here is on investigating the GTX 285's suitability for professional 3D rendering on the Mac.

What's in the box

(Note that the SLI cable for two-card Windows gaming is not included.)

As you can see above, the card itself a bit shorter than the Radeon 4870. It doesn't lock into the Mac Pro 2009's plastic bracket, but it's held firmly in place by the notched card and Mac Pro brace. You'll also notice that the GTX 285 doesn't include the much-reviled Apple mini DisplayPort connector; instead, it has two standard dual-link DVI ports. If you're wondering why anyone would hate the mini DP, this image should speak volumes:

The elegant option for mini DisplayPort to HDMI, and the whole kit only costs you $40 + tax and delivery. From the Ars forum thread 'Apple, your mini displayport is stupid. I hate it.'

Unlike the Windows-only GTX 285 cards, this card doesn't feature a TV out. This isn't a problem in my opinion. On the hardware side, the GTX 285 is reasonably future-proof thanks to its 1GB of DDR3 memory and OpenGL 3.0 spec compatibility. My biggest gripe with the Apple-compatible Radeon 4870 is that it only has 512MB of RAM, which is really the rock bottom for modern games and too little for high-end 3D application work. The 4870's only built for OpenGL 2.1 compatibility so there's also less room for growth with the Radeon. All we need now is for Apple to bring us OpenGL 3.0 support in OS X and someone to make an application that uses it. Real soon now.

Thanks to the Nehalem Mac Pro's brilliant design, 'installation' is nothing more than popping it in, fastening the card via a screwdriverless PCI Express mounting bracket, and attaching the two molex cords. Make sure to install the drivers before you install the card though—I learned the hard way that you will have no video if you don't. EVGA has posted a newer driver [DMG] that I recommend installing instead of the one on the CD.

All tests in this review are done with the newer driver.