One program that missing when using MacBook is there is no Microsoft Visio for Mac. Although Microsoft has been officially releasing Microsoft Office (e.g Word, Excel, PowerPoint) for Mac, Microsoft still does not release Visio for Mac, at least until now.

Since I work as a network administrator, Microsoft Visio is very important for me to draw network diagram / topology. Although there are many Visio alternatives for Mac such ConceptDraw, LucidChart, SmartDraw, or OmniGraffle according to my opinion they can not replace Visio. It is the best because of its simplicity and easy to use. Another reason is I am already familiar with Visio when running Windows and also already bought the software license so buying another program for this purpose is wasting money.

In this article I will not talk about which software is better. I want to show you how to install Microsoft Visio on Mac running OS X El Capitan on top of Wine, thanks to WineHQ team for making this great tool. It should be applicable on previous version of OS X such as OS X Yosemite, OS X Mavericks, and Mac OS X Mountain Lion.

Lets start with the installation process 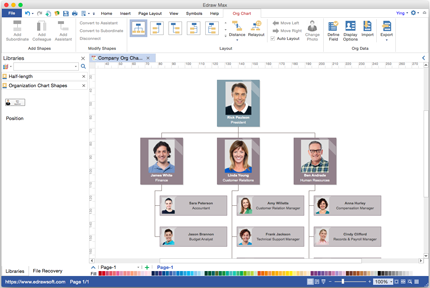 Windows programs can be run on OS X, Linux and BSD via WINE (Windows Emulator) so first we need to install wine and winetricks.

We can install wine and winetricks packages using Homebrew, follow this post how to install Wine on OS X. Although it is not necessary, it is better to set environment folder for Visio. We will set it under $HOME/.vision2007. Inside your $HOME directory (/Users/your_username), create .visio2007 directory.

Perform Wine initialisation and setup of WINEPREFIX in .visio2007

We need several packages be installed to run Visio 2007. Those packages are gdiplus, msxml6, dotnet20, riched20, and corefonts. Install them using winetricks as follows:

Capture example of installing .Net Framework (dotnet20) is as in image below:

After installing the packages above, then run Wine configuration editor (winecfg)

In Wine configuration, under Libraries tab make sure that gdiplus, msxml6, riched20 are set to native. See image below!

Once the above dependency packages installed and configured, we are ready to run the installation.

After the installation completed and successful, you can run Visio using command below:

Visio should be running well without any problem.

To make it easier to run Visio using Terminal, create a script named as ‘visio’.

Copy and paste the following command into the visio script. Change the ‘your-username’ accordingly with yours.

Make it executable and then move it into $PATH

You can try these products on most of the recent Mac OS X versions such as Yosemite, Mountain Lion and Lion OS X. You can check similar post about MS Publisher alternatives for Mac here.

Best Alternatives to Visio for Mac

A drawback of OmniGraffle Pro is that it is not as precise as Microsoft Visio and lacks the fine tuning of shapes and objects that Visio offers. OmniGraffle Pro also lacks integration of CAD and features like DWG or DXF (AutoDesk file formats). OmniGraffle Pro is available at Mac App Store for $99 and the iPad version costs $49.99.

ConceptDraw Pro is a professional diagramming application which is used for creating business graphics diagrams, flowcharts and infographics. It was first introduced in 1999 and developed by CS Odessa for Microsoft Windows and Mac OS X platform. It is mostly used by professional designers working in a CAD environment. It includes lots of different keyboard shortcuts for ease of access. Like OmniGraffle Pro, it also allows the users to import and export Visio files. It offers tons of templates in different categories including landscaping, engineering, management and sciences.

ConceptDraw Pro is a great alternative to Visio for Mac users as it offers more features and can easily handle the most demanding professional needs. It also offers a ConceptDraw Solution Park, which greatly extends the capabilities of the application. ConceptDraw Pro is available at Mac App Store for $199 and a single license is valid for both Mac OS X and Microsoft Windows. Although it is harder to learn, but users are satisfied with it as an alternative to Visio for Mac.

Lucidchart is a web-based diagramming application with a drag and drop web interface which allows users to draw any kind of diagram. It was introduced in 2008 by Lucid Software Inc and it allows the users to create flowcharts, organizational charts, UML designs and many other diagram types. LucidChart supports all latest web browsers, including Google Chrome, Firefox and Safari.

LucidChart is a cloud based application and it is fully integrated with Google Drive and Microsoft Office 2013. It supports both import and export of Visio files. One of the main features of LucidChart is that it allows multiple users to work on the same file as a team. LucidChart is a diagramming application for a variety of professionals, including designers, executives and engineers. Being a web-based application, LucidChart is very light, free of bloatware and one of the best alternatives to Visio for Mac users. LucidChart offers a free limited version for single users, but to use all the features users must purchase monthly subscriptions.